Share
Twitter LinkedIn Facebook Email
Across a broad portfolio of initiatives and investments, the Government Innovation program helps city halls build the teams and develop the skills needed to creatively tackle their most urgent challenges. By expanding local government’s creative capacity, Bloomberg Philanthropies bolsters the ability of mayors and other city leaders to set bold agendas, bring the experiences of residents into their work, and partner with the private and nonprofit sectors from a position of strength. Each is an essential step in pushing the boundaries of civic innovation in the United States and abroad.

“You can’t have the right strategy, much less implement it, unless you know what the facts are. When you’re a mayor, you actually have to generate a real understanding of what the problem is and you have to formulate real solutions that really matter.”
Ethan Berkowitz
Mayor
Anchorage, Alaska 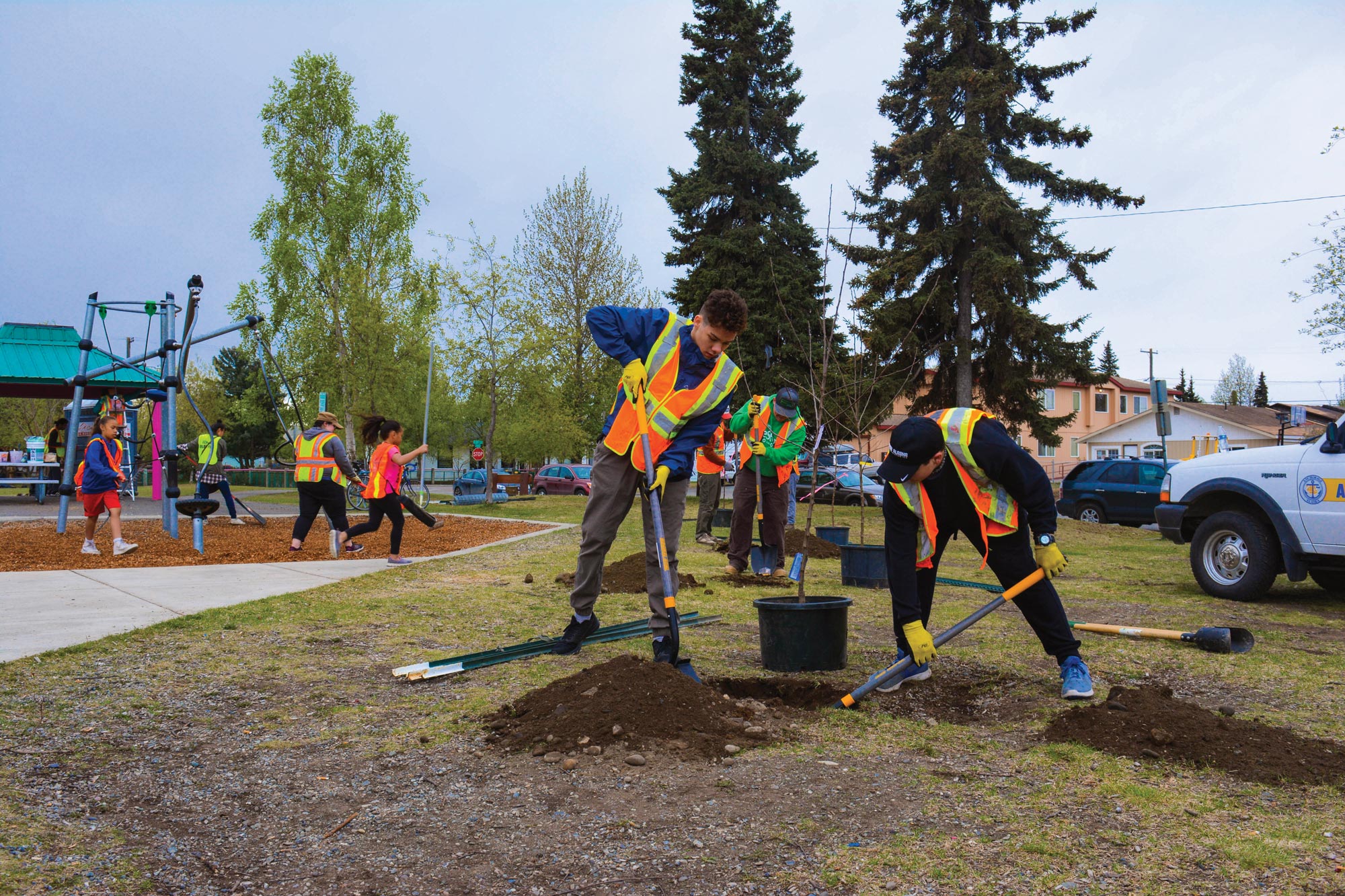 Volunteers in Anchorage, Alaska, plant trees at the Fairview Park Fix-It as part of the Cities of Service Resilience AmeriCorps program. Credit: Municipality of Anchorage 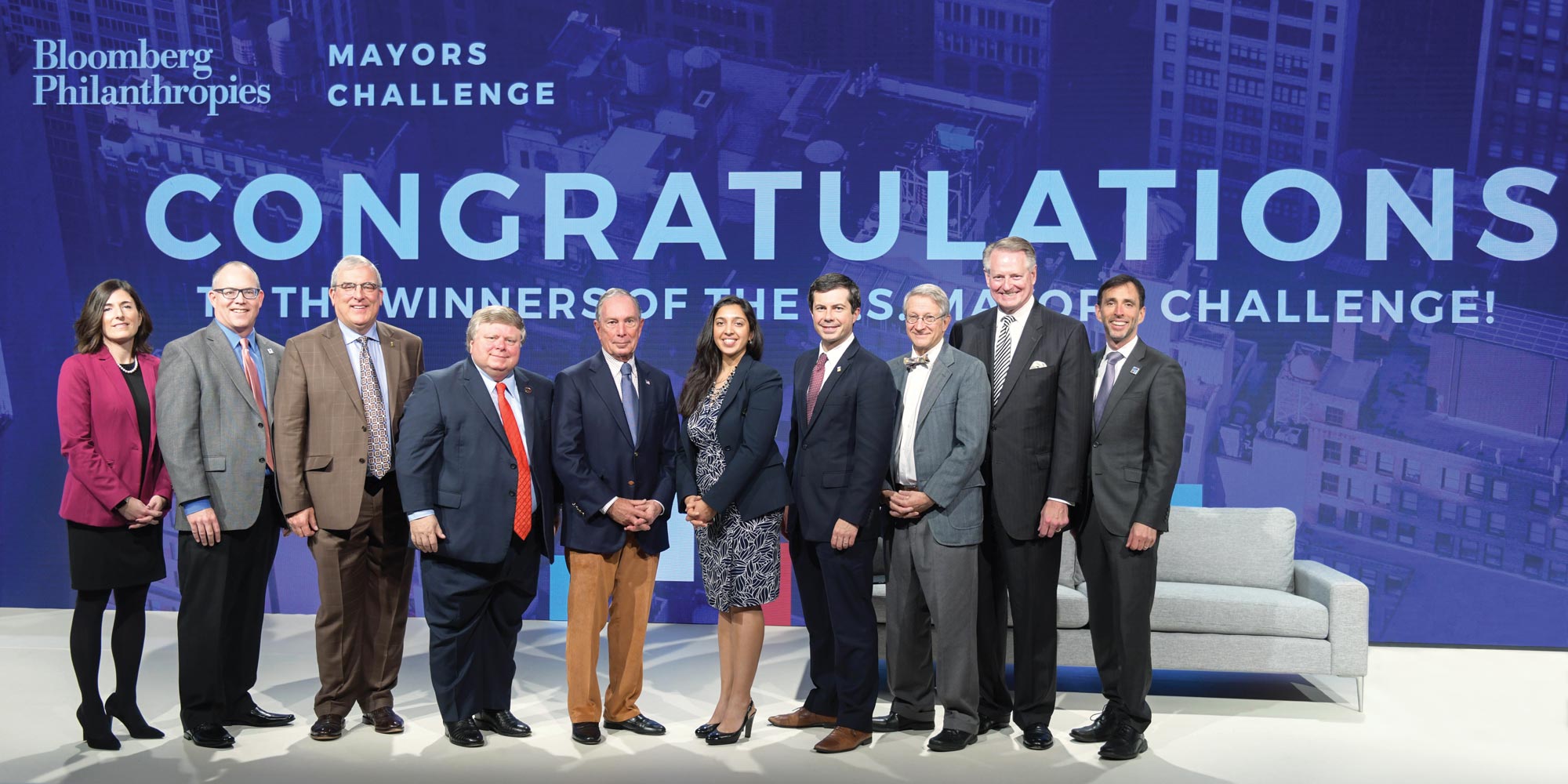 As part of the Bloomberg American Cities Initiative, the 2018 Mayors Challenge returned to the United States, awarding nine cities $1 million each to bring their ideas to life. The winning cities were chosen from a record 324 applications. The winners include Denver, Colorado; Durham, North Carolina; Fort Collins, Colorado; Georgetown, Texas; Huntington, West Virginia; Los Angeles, California; New Rochelle, New York; Philadelphia, Pennsylvania; and South Bend, Indiana. These cities will address a range of challenges, from reducing carbon emissions and confronting the opioid crisis to making the justice system less traumatic for young people. Prior to selecting the winners, 35 finalist cities each received $100,000 to test and refine their ideas. This new test-and-learn phase incorporated some of the most crucial elements of innovation that Bloomberg Philanthropies promotes to cities through its work, including understanding the problem from residents’ points of view before developing ideas, and quickly testing ideas on a small scale to learn how to strengthen them and improve the likelihood of a new policy’s success. Over six months, finalist cities conducted more than 100 tests, engaged more than 19,000 residents, and raised nearly $15 million from local partners to support their efforts.

A distinguished committee, co-chaired by former U.S. Ambassador Caroline Kennedy and former Xerox Chairman and CEO Ursula Burns, reviewed the final proposals and selected the nine winning ideas, which were announced at CityLab 2018 in Detroit.

Focus on Cities to Drive Progress.

Local government can be the site of innovation and problem-solving that improve residents’ lives. Read how one local government is taking on a major challenge. 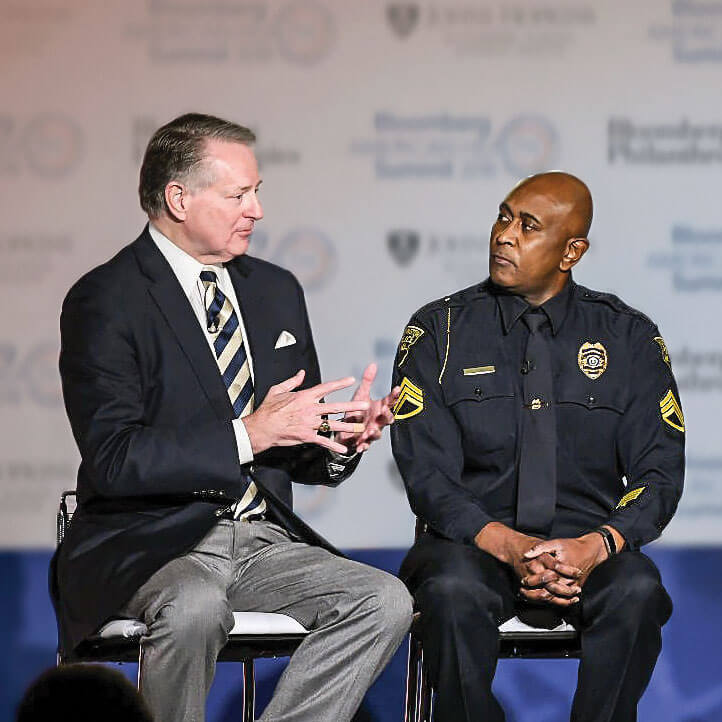 Investing in Mayors and City Leaders 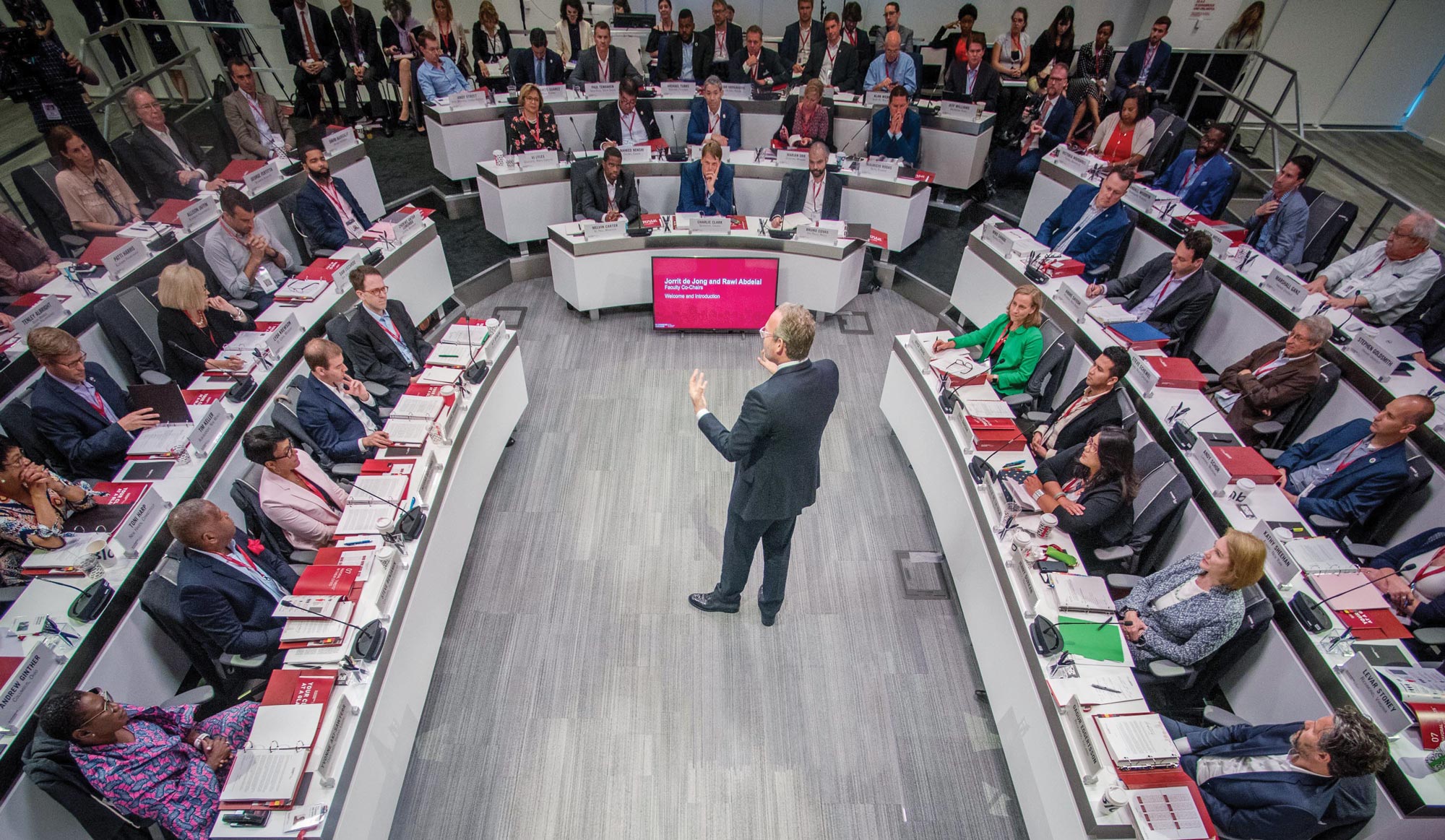 “It is rare for a mayor to have access to inspirational leadership and management training. The Bloomberg Harvard City Leadership Initiative goes even further by supporting mayors to advance organizational and innovative change to make each of our cities even better.”
Naheed Nenshi
Mayor
Calgary, Canada
Class of 2018-19

Running a city is one of the world’s most complex and demanding jobs. And, as more of the world’s population moves to cities, it becomes increasingly important to help mayors accomplish their goals and make their local governments smarter and more effective.

Now in its third year, Bloomberg Philanthropies’ unique collaboration with Harvard Business School and the Harvard Kennedy School of Government equips city leaders with the management tools needed to tackle their toughest challenges and develop a culture of innovation, data use, and collaboration inside city hall.

“The Bloomberg Harvard City Leadership Initiative not only gave us access to the brightest minds in government, business and academia, but provided us with peer-to-peer exchanges with other city leaders with firsthand knowledge of the challenges we all face.”
William Peduto
Mayor
Pittsburgh, Pennsylvania
Class of 2017-18 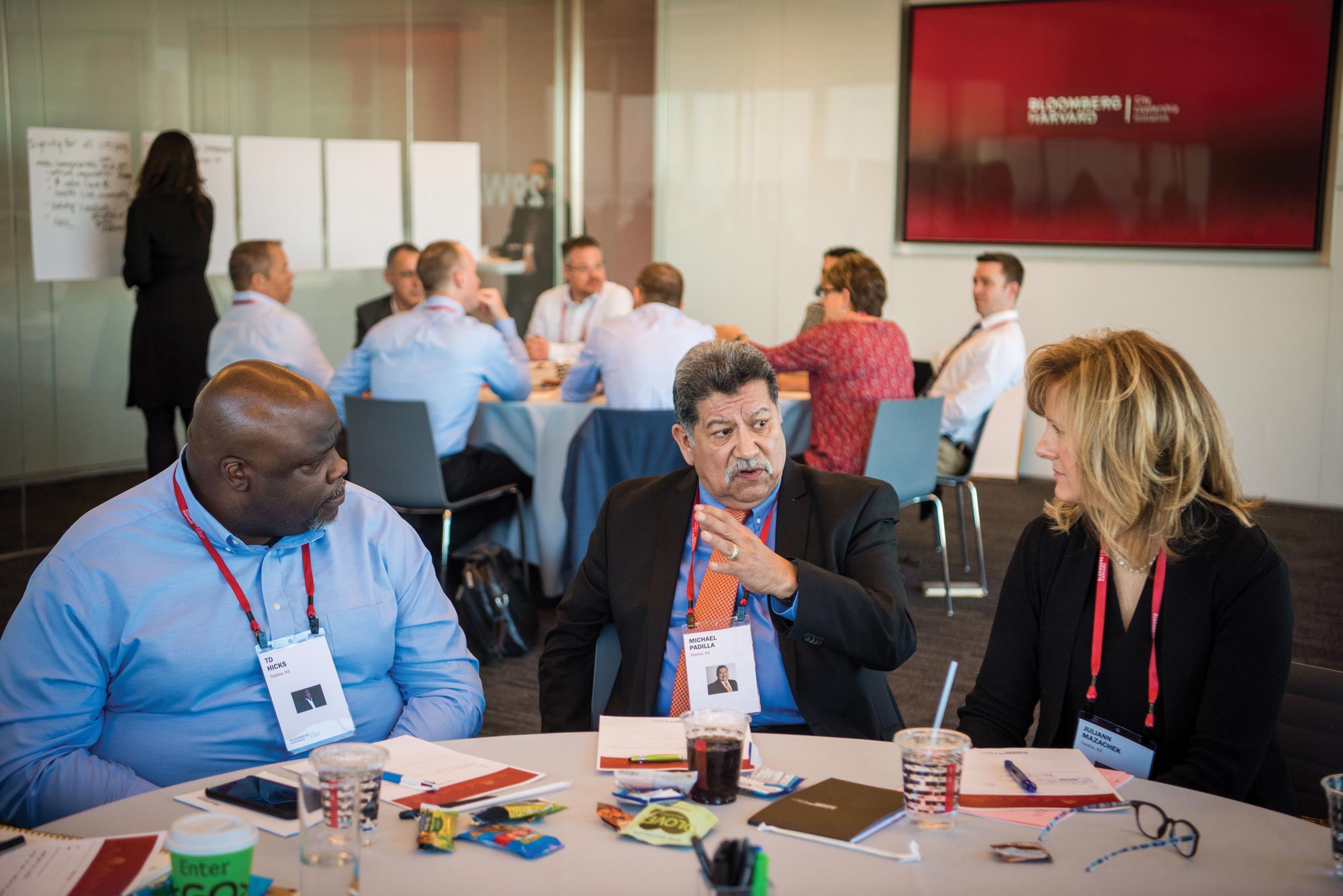 Senior city hall staff members convene in New York City to learn leadership and management strategies from leading experts and from one another.

Hear from Calgary Mayor Naheed Nenshi as he discusses the Bloomberg Harvard City Leadership Initiative and the impact it has had on the city. 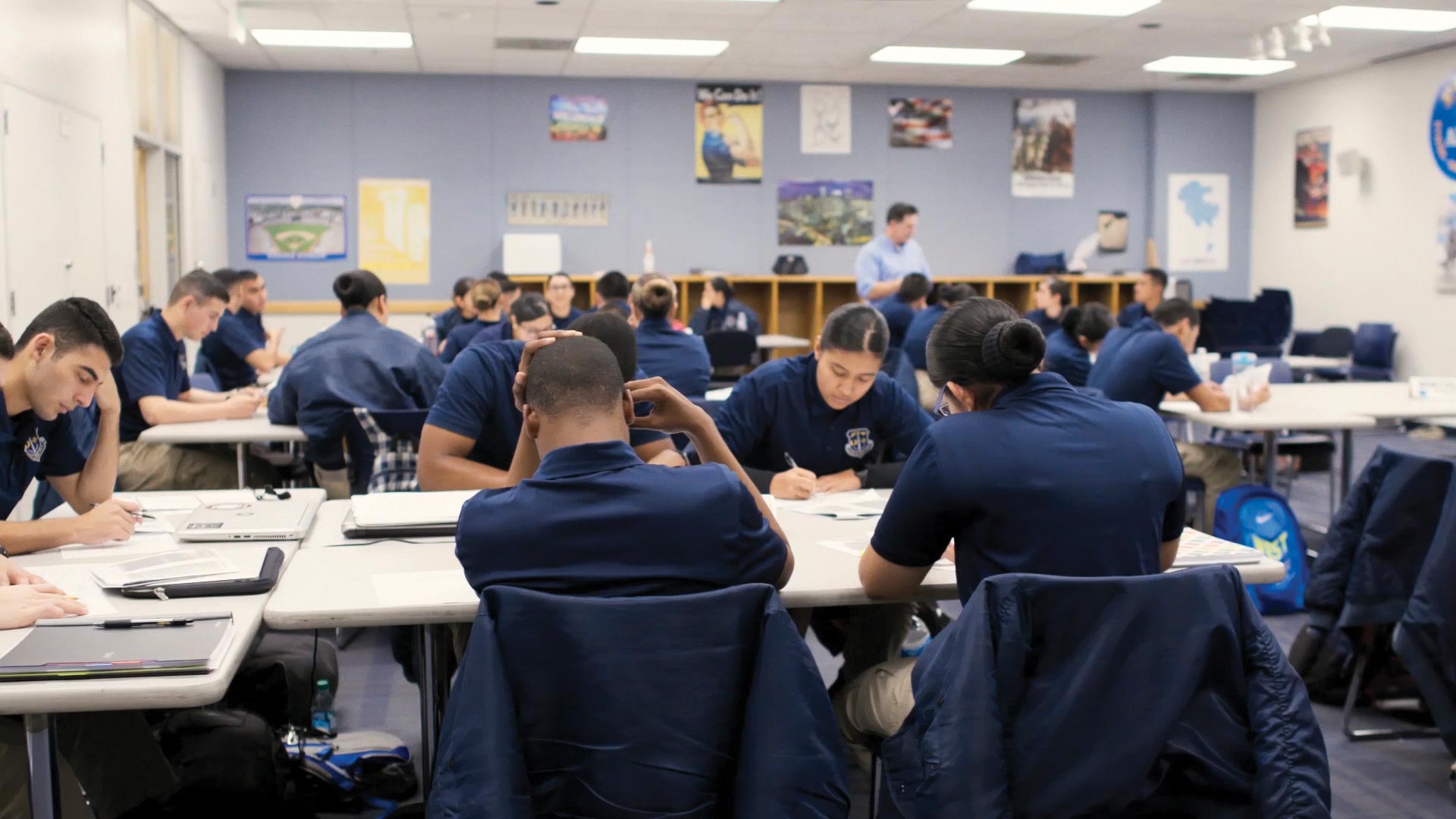 Young police trainees in Los Angeles, California, learn through a program created by the city’s innovation team to keep them engaged in the recruitment process until they can become sworn officers at age 21.

Inspired by the Bloomberg Administration’s success in creating cross-departmental solutions to tackling challenges in New York City, Bloomberg Philanthropies has led a movement to help other cities develop the skills needed for innovative problem-solving. In 2012, the foundation began funding innovation teams – or “i-teams” – in city halls around the world. These i-teams, which are composed of highly skilled individuals with expertise in topics like data analysis, design, and project management, help mayors work across sectors and silos and with citizens to creatively tackle each city’s top priorities. When that work began, just five U.S. cities had Chief Innovation Officers. Now, more than 70 U.S. cities have adopted the position.

“Our innovation team has allowed Durham to completely rethink how the city supports our justice-involved community members, who often face formidably high barriers to finding a job or securing housing. The i-team has allowed us to find creative and powerful new solutions and to work together in new ways to help more residents share in Durham’s prosperity.”
Steve Schewel
Mayor
Durham, North Carolina

The i-teams program has supported staff in 30 cities, enabling them to achieve remarkable progress for their communities. In Syracuse, New York, for example, the i-team helped the city recover an extra $1.5 million in delinquent taxes by redesigning tax collection notices to make them easier to read and understand. Mayors in cities across the country and the world have effectively used i-teams to improve public safety, support small businesses, and make government more responsive to residents’ evolving needs. 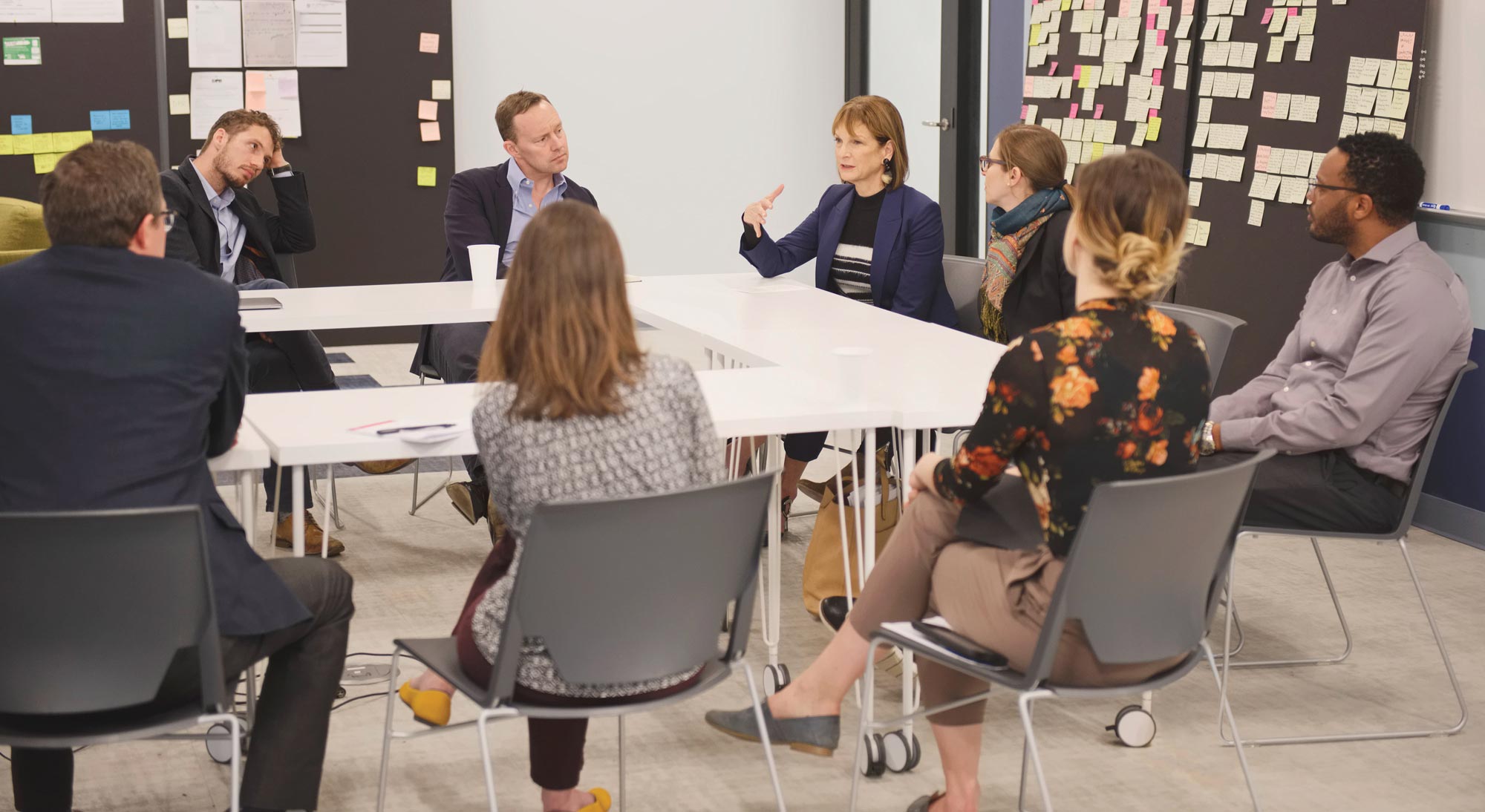 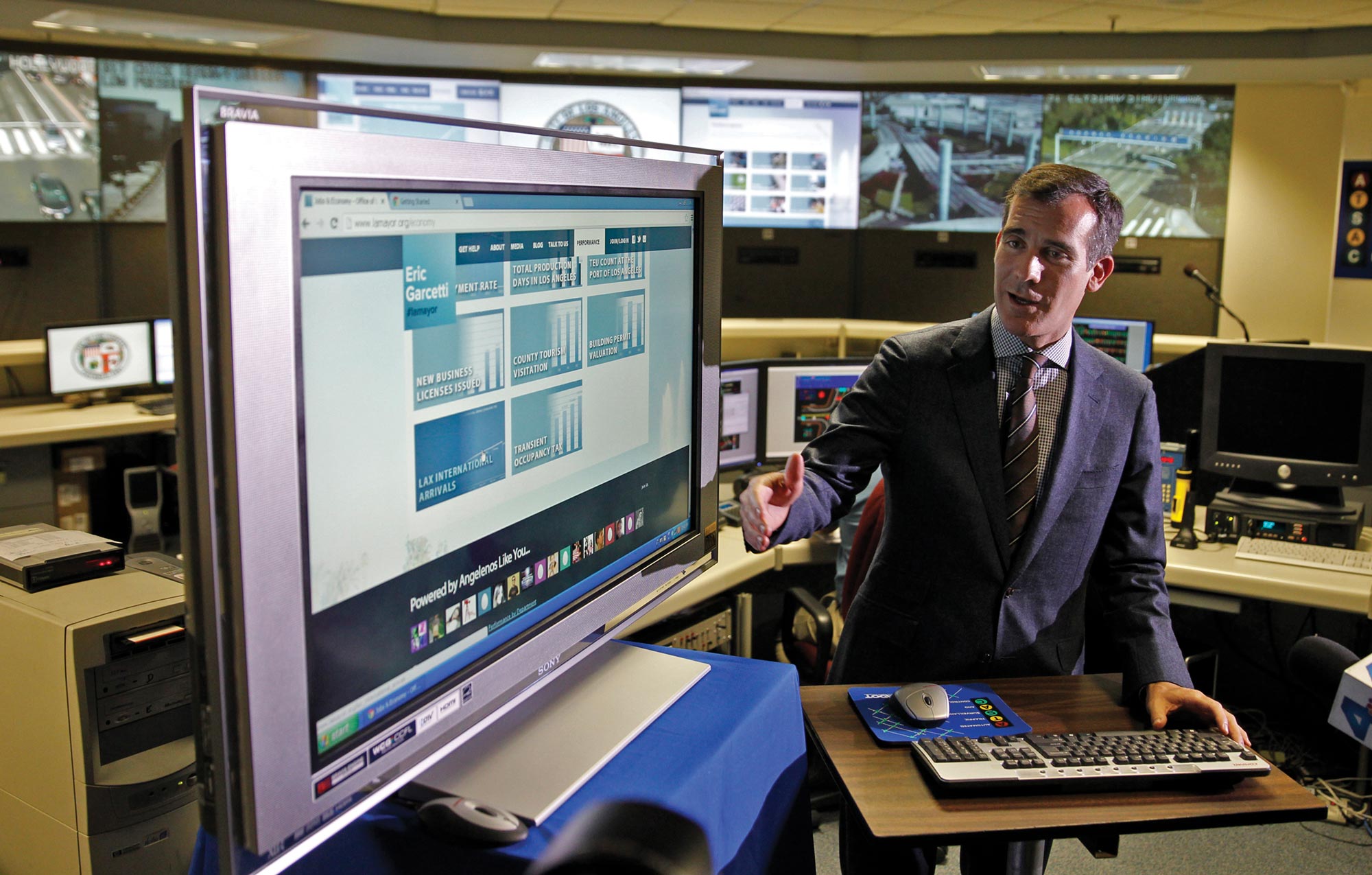 The What Works Cities program is the nation’s most comprehensive effort to enhance cities’ use of data and evidence to make better policy decisions, improve services, evaluate progress, and find “what works.” Starting in 100 mid-sized cities from 39 states and growing from there, the program continues to help cities improve the way they use data to identify and respond effectively to their residents’ needs.

“Numbers tell compelling stories, and they help us find answers that make a real difference in people’s lives. We’re grateful for what the partnership with Bloomberg Philanthropies has helped us accomplish for communities across our city.”
Eric Garcetti
Mayor
Los Angeles, California

In 2017, the program created What Works Cities Certification, a standard that measures the extent to which cities have the right people, policies, and practices in place to use data for decision-making, and inspires many more cities to improve their practices. Over its first two years, 13 U.S. cities have received official What Works Cities Certification, including four (Kansas City, Missouri; Los Angeles, California; Louisville, Kentucky; and Washington, D.C.) that have achieved certification at the gold level.

In November 2018, Bloomberg Philanthropies expanded the What Works Cities program in collaboration with the Bill & Melinda Gates Foundation and Ballmer Group. The joint effort will help a group of ten cities use data and test new ways to improve opportunity, particularly in neighborhoods where children lack access to good schools or face systemic barriers to economic mobility. 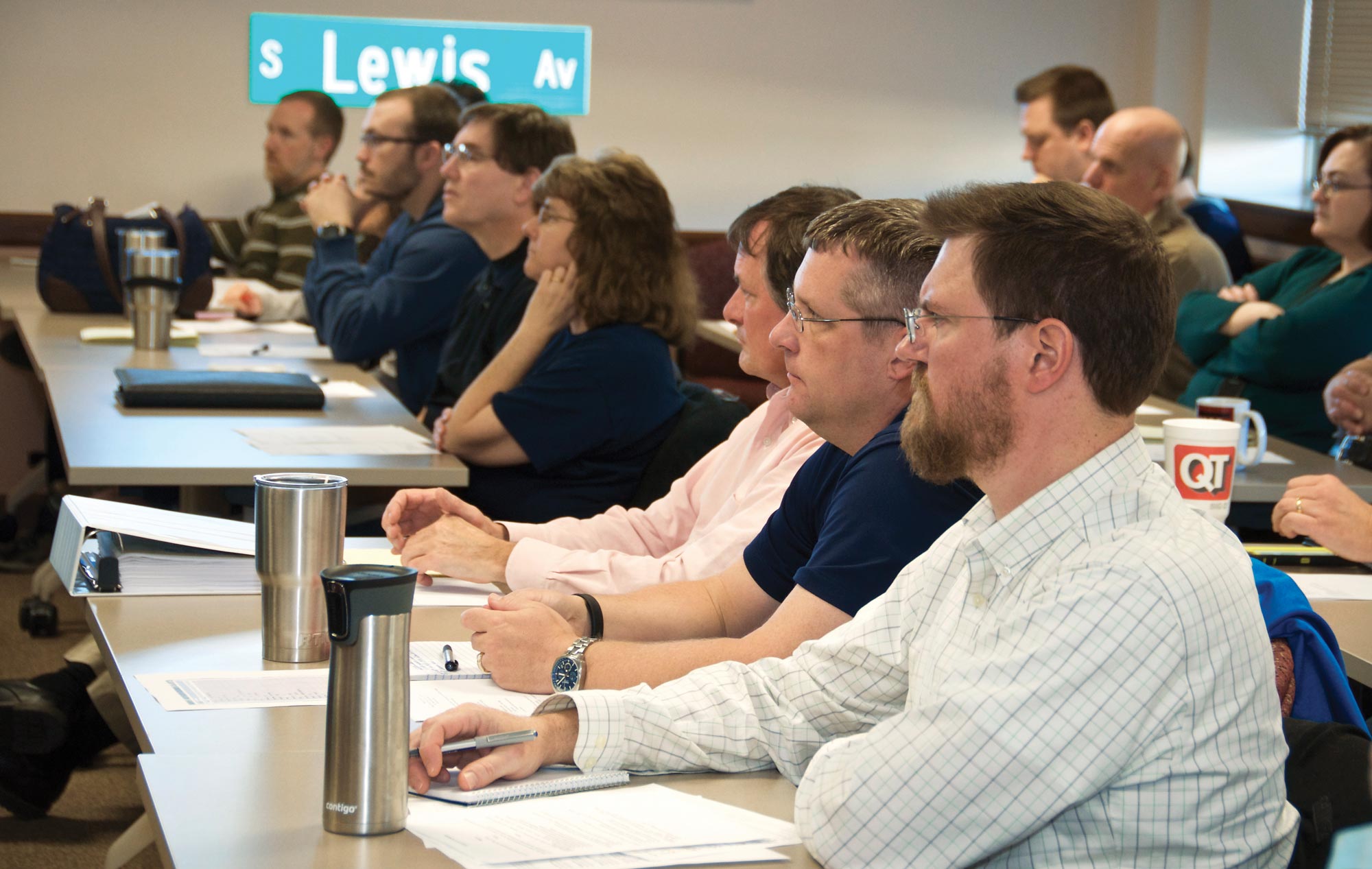 Bringing Together the Best and Brightest to Make Cities More Livable 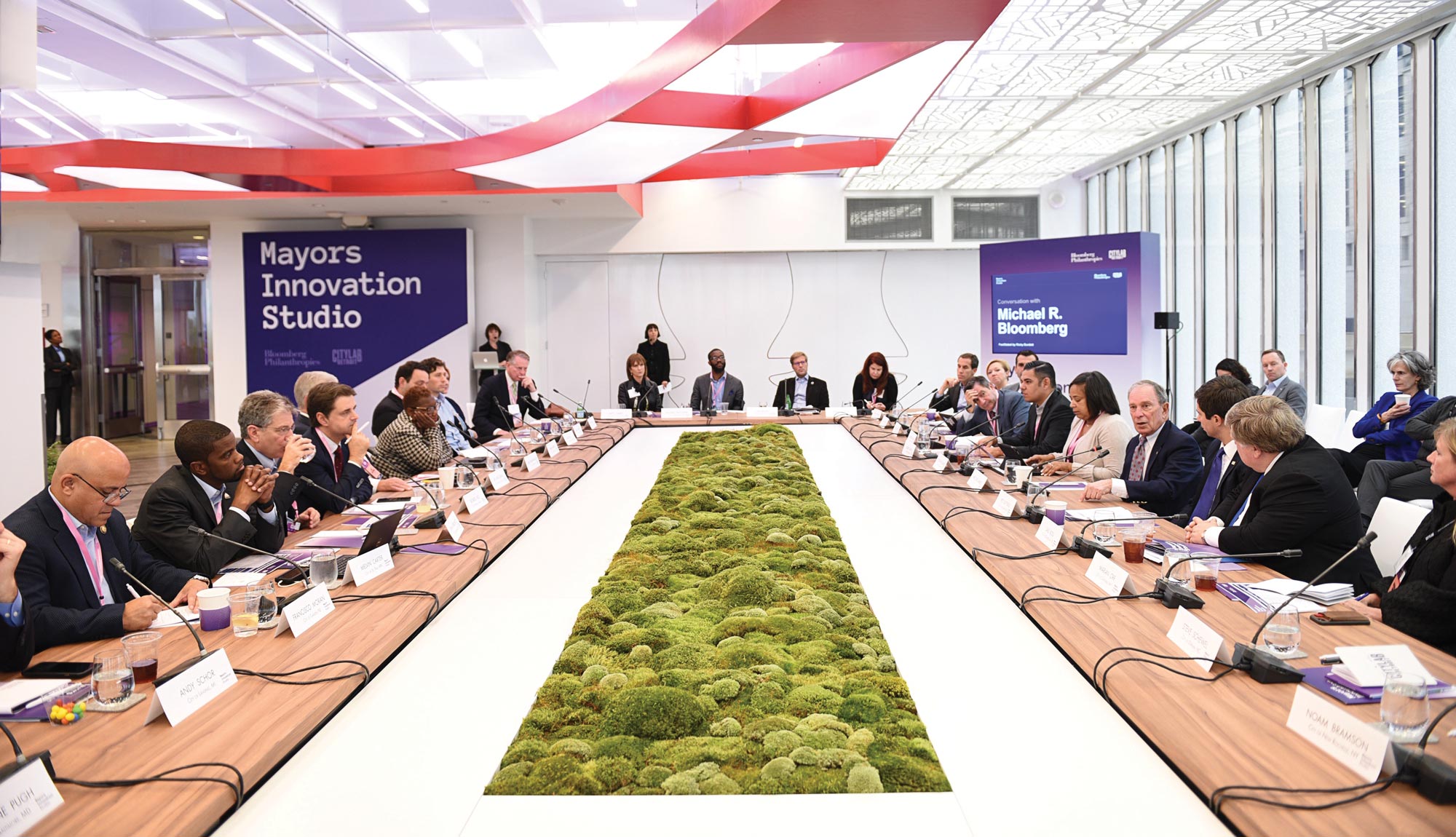 Mayors come together at the Mayors Innovation Studio at CityLab 2018 to discuss solutions to the challenges their cities face.

For the sixth year, Bloomberg Philanthropies joined with the Aspen Institute and The Atlantic to host CityLab, a three-day conference of leaders from across the globe and from the public, private, and nonprofit sectors.

“As mayor, it’s so easy to feel like you’re on an island, to feel like you’re alone. And then you come to CityLab, you interact with other mayors, and you see and hear what they’re doing and it’s like an adrenaline shot. It gives you the energy to go back home and try something different or new.”
Randall Woodfin
Mayor
Birmingham, Alabama

CityLab gathers the world’s most creative mayors and urban innovators with artists, academics, funders, and other public- and private-sector leaders focused on improving cities and spreading strategies that work. Hosted in Detroit, CityLab 2018 brought together more than 600 attendees who hailed from more than 156 cities and 27 countries. At the start of the conference, Bloomberg Philanthropies hosted a special session for mayors to connect and share lessons with peers from around the world and, for the first time, a gathering for city hall innovation officers from cities across the U.S. and the world.

Past CityLabs have been held in London, Los Angeles, Miami, New York, and Paris. CityLab 2019 will be held in Washington, D.C. 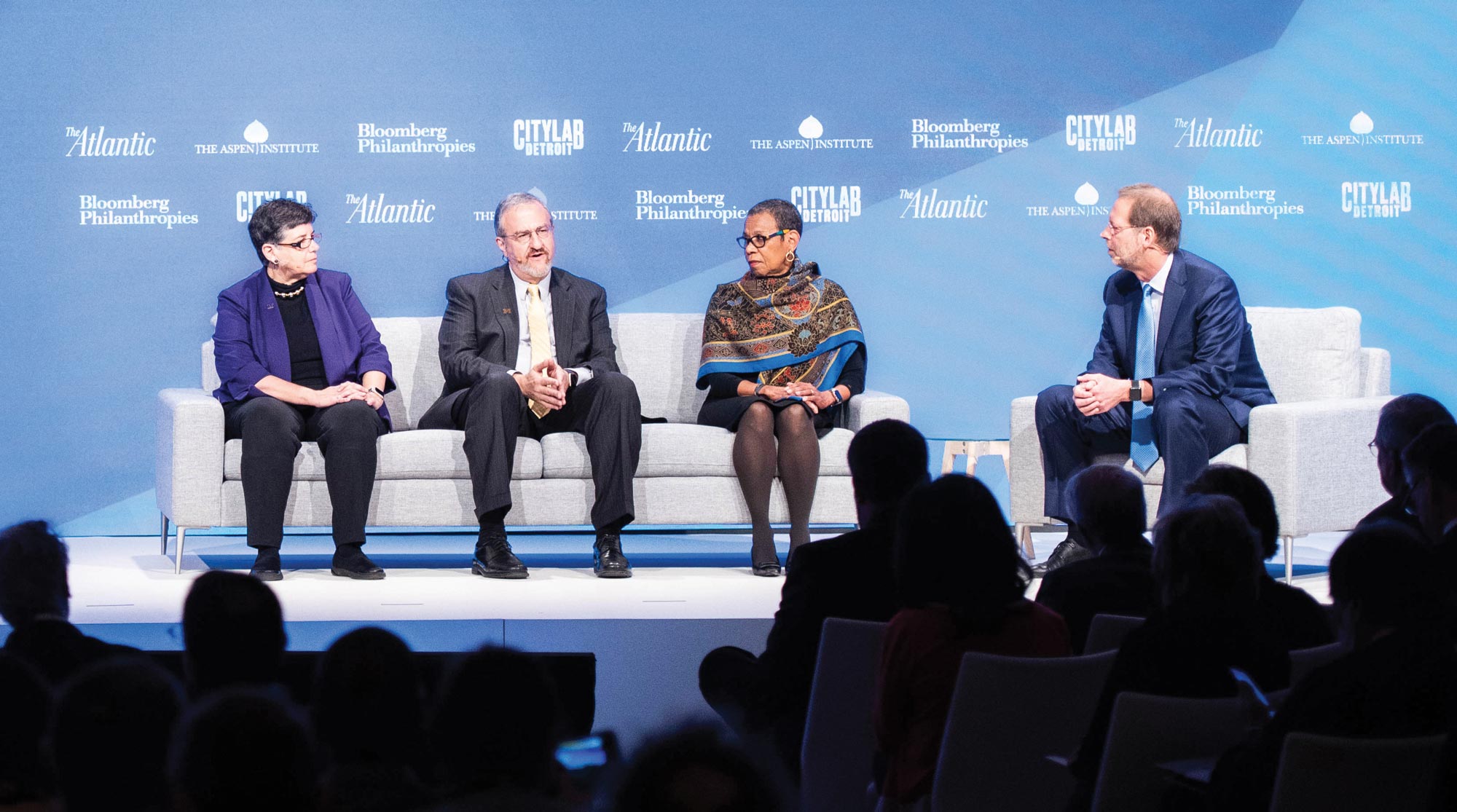 In April 2009, Mike Bloomberg became the first U.S. mayor to create the position of Chief Service Officer, a position dedicated solely to engaging citizens as volunteers. This became the model for Cities of Service, which was formed later that year by Mayor Bloomberg and 16 other mayors.

Now with a network of more than 260 cities across the Americas and Europe, Cities of Service helps mayors build stronger cities by changing the way local government and citizens work together. City leaders around the world seek guidance from Cities of Service to help them tap into the knowledge, creativity, and service of their citizens to identify and solve pressing local challenges.